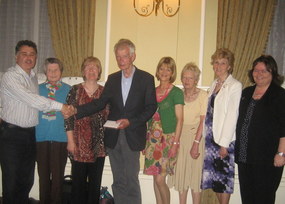 Monaghan Mental Health Association began its 40 Year Anniversary Celebrations with a very well attended seminar in the Westenra Hotel last week. The seminar entitled “The Power of Thoughts” included riveting presentations from cognitive behavioural therapist Marty Neeson Mc Kenna on “The Power of Thoughts”, Alice Mc Kenna and Patricia Cavanagh on the “The History of St. Davnet's” and Michael Mc Ginn, Ballybay Mental Health Association on “Awareness of Mental Health in your local community”
The information evening proved to be a very interesting, practical and informative presentation on the issues facing people today and how they can cope using the “power of thoughts”

Kicking off the presentations was Marty Neeson Mc Kenna who spoke on how as individuals we can have varied opinions and thoughts about the same event or situation.

She began, “Realising that many thoughts are opinions rather than fact makes it less likely that we will be distressed by them, and more able to make wise and calm decisions about what the best action to take.  One of the tasks of a cognitive behavioural therapist is to help clients to observe these automatic thoughts particularly the negative ones, and how they have an effect on our mood and the way we behave.”

Continuing she said, “We can also engage in distorted thinking patterns i.e., Catastrophizing:  You believe that what has happened or will happen will be so awful and unbearable that you won’t be able to cope e.g. It would be terrible if I failed, this type of distorted thinking is common is anxious people.   Mind-reading: You assume that you know what people think without having sufficient evidence of their thoughts, ‘He thinks I’m a loser’. common thinking patterns with people who have social anxiety. Labelling:  you assign global negative traits to yourself and others, ‘I’m a failure’ or I’m not good-enough’, depressive type thinking behaviour. Fortune telling:  You predict the future negatively, ‘things will get worse’, ‘I will fail at the exam’, ‘I am always going to be like this’. Identifying our distorted thoughts helps us to become more aware of the type of twisted thinking we are involved in, and ultimately how this impacts the way we feel and behave.”

Marty went on to say that negative automatic thoughts are thought to result from maladaptive core beliefs and assumptions.  “ If a person had a difficult or traumatic life experiences in their childhood they are most likely to develop negative core beliefs, e.g. ‘I am bad’, ‘I am unlikeable’, ‘I am different’, ‘I am not good-enough’ etc., developing these beliefs about ourselves other people or the world are unpleasant and uncomfortable,  so in order to protect ourselves we develop rules for living to protect us from these core beliefs e.g. Since I am not good enough (CB) I must work really hard in order to prove myself (Rule)  or Since I am worthless (CB) I must put other people’s needs before my own in order to feel good about myself (Rule).  This helps to explain why certain events tend to trigger episodes of mental health problems: certain events may trigger the person’s negative beliefs and they may then start filtering in information according to these negative beliefs”.

The assembled audience clearly related to this presentation which was superb in that it brought cognitive behavioural therapy to everyone in a practical and interesting way. It was clear that a follow up would be very popular.

Patricia Cavanagh spoke about the history of St Davnets beginning with Monaghan District Lunatic Asylum which was built in 1869 and was one of the last of a network of Lunatic Asylums built countrywide.  Patricia explained, “Prior to this there was little or no provision of care for the mentally ill in Ireland. It was an era when people were chained in sheds, backrooms and attics, locked away from the outside world and forgotten about. The Asylum was initially welcomed as a place of care for those with mental illness but the picture soon changed as over the years as the buildings became grossly overcrowded and what once was a place of refuge, became somewhere that was no longer conducive to recovery. Despite the problem of overcrowding “Life on the Inside” had its good times. Diligent staff worked tirelessly to improve life for the patients, papers and periodicals were supplied and entertainment from travelling shows helped break the monotony of everyday life. Attendants or “Keepers” as they were commonly known lived in the Asylum and sometimes they were employed because they had an art or craft that they could teach to the patients. The Asylum was completely self sufficient, complete with high walls and locked gates. It had its own farm, kitchen, laundry, sewing room, shoe-makers room etc”

Patricia went on to say that the road from “life on the Inside” to “life on the outside” i.e. the change to care in the community was a long and slow process taking well over one hundred years to accomplish.

Alice Mc Kenna spoke about the improvements over the years and how the introduction of the Phenothiazine group of drugs helped revolutionise treatment. She complimented Dr Owens and all his staff for being part of the new system that now saw people being cared for in a community setting. She also spoke about the development of Solas.

She was followed by Michael Mc Ginn who spoke of his past involvement as Development Officer for Mental Health Ireland working with Mental Health Associations across the North East including Monaghan Mental Health.  He made clear how we can all in very practical and simple ways help each other with as little as a kind word or gesture. He underlined the work of volunteers such as those involved in organizations such as MMHA.

The evening concluded with a special presentation to Dr. John Owens who was introduced by Michael as a pioneer of the development of mental health care in the community. Dr Owens spoke of his experiences working in the mental health field and his frustration with the slow pace of change, lack of proper funding and political will to implement fully the mental health strategy put forward in “Vision for Change”. The presentation was made by MMHA members Esther Mc Manus, Maureen Murray, Maureen Maloney, Caroline Waters, Darina Maloney Moffet, Rita Reilly and Emer Brennan. Mental Health Ireland Development Officer Sean Mc Kiernan was MC for the event.
Monaghan Mental Health Association - Information Evening
Celebrating 40 years of Monaghan Mental Health Association
"The Power of Thoughts"
Speakers:
1. "Power of Thoughts" - Marty Neeson-Mc Kenna, Cognitive Behavioural
Therapist
2. The History of St. Davnet's - Alice Mc Kenna and Patricia Cavanagh
3. Awareness of Mental Health in your local community – Michael Mc Ginn,
Ballybay Mental Health Association
Interesting, practical and informative presentation on the issues facing people today and how they can cope using the “power of thoughts”
in The Westenra Arms Hotel, 8pm, Wednesday 23rd May 2012 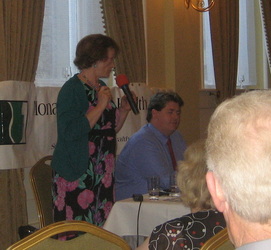 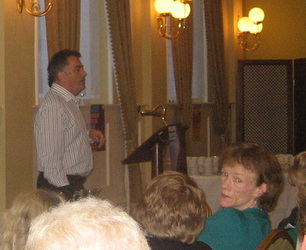